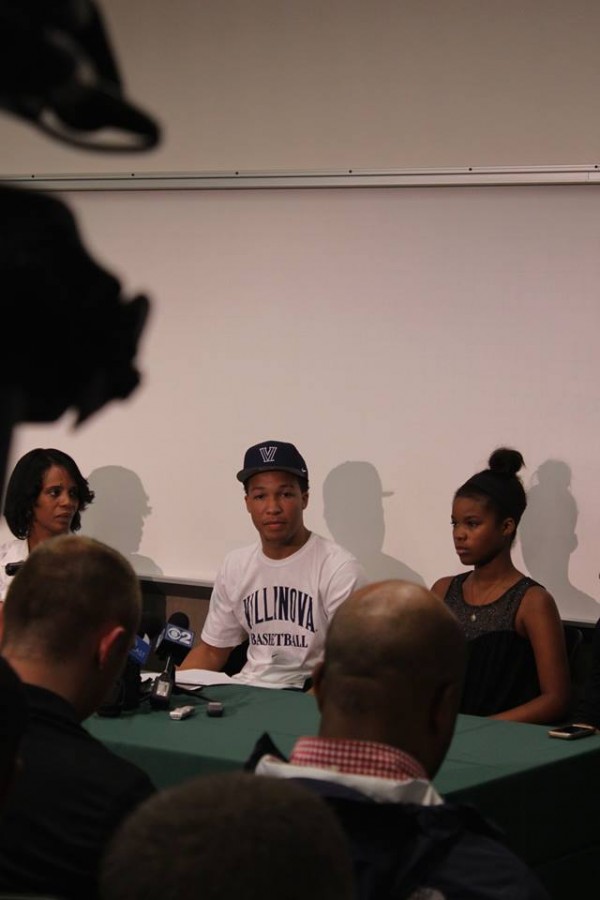 COLLEGE COMMITTED. Donning Villanova apparel, Jalen Brunson '15 officially committed to the university on Sep. 10. He plans to remain in Villanova for the next four years.

Among a crowd of his fellow students, reporters, cameras and his family, Jalen Brunson ’15 announced he would be attending Villanova University in a press conference after school on Sep. 10, 2014.

After thanking his teammates, coaches, Stevenson administration and family, Brunson discussed the difficulty of this decision.

“This was a very hard decision for me,” Brunson said. “I was in and out of schools. I really did not know what I wanted to do.”

By Wednesday, Brunson had narrowed down his choice between Villanova and the University of Illinois at Urbana-Champaign (UIUC). To announce his decision, Brunson unzipped his sweatshirt to reveal a Villanova t-shirt and then put on a Villanova hat. This was met with a loud round of applause from the spectators in the room.

When asked what the deciding factor behind his choice was, Brunson said that both schools had a lot in common, but what ultimately put Villanova ahead of UIUC was the comfort level he felt with his future teammates and coaching staff, including head coach Jay Wright.

This reasoning reflects earlier comments Brunson’s father made about how this decision was not just about choosing a program but also about choosing a coach. In addition to the coach, Brunson said the chemistry he observed of the Villanova team was “unbelievable.”

“They’re always together; they’re always one group,” Brunson said. “Going to Jay Wright is very similar to coming to here with Coach Ambrose and the rest of the guys [at Stevenson].”

Brunson said he has prepared for the toughness the Villanova team has as a core group.

When Brunson goes to Villanova next fall, he will be playing alongside Senior starting point-guard, and Villanova fan favorite, Ryan Arcidiacono.

When asked about playing with Arcidiacono, Brunson said it was a similar situation to his freshman year playing basketball at Stevenson.

“I just need an opportunity,” Brunson said. “It’s my job to earn it.”

During the press conference, Brunson made no comment about plans for playing basketball professionally although he did say he plans to remain at Villanova for all four years.

On the more immediate horizon is the upcoming States Tournament for boys basketball this year. With his college commitment out of the way, Brunson is completely focused on winning the championship this year.