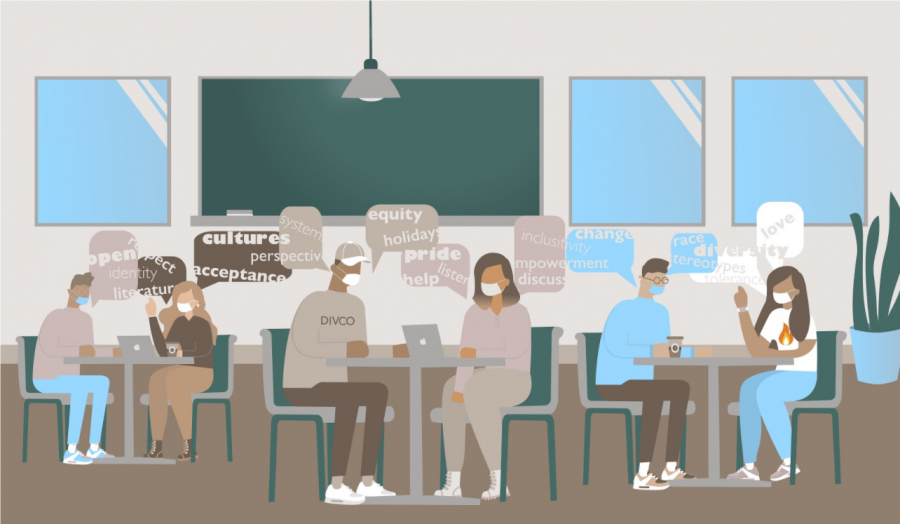 Picking up his phone, Dr. LeViis Haney scrolls through the various news articles covering BLM protests, police brutality and racial justice, checking out his newest calendar reminder — an upcoming interview for a brand-new Stevenson position: the Director of Equity, Diversity and Inclusion (EDI).

Although Stevenson has been a longtime proponent of inclusivity, the resurgence of the Black Lives Matter movement has compounded the administration’s beliefs, pushing them to hire an EDI Director who not only provides valuable insight but also launches schoolwide changes. Changes like these, though initiated by the EDI Director, are put into action by students; therefore, Stevenson prioritized job candidates with strong communication skills as a way to ensure willingness from both parties.

For Haney, working with students was always going to be a part of the job. Schools cater to the students — their approval and beliefs should be top priority. To achieve this, Haney feels that it is important to be as involved as possible within student groups.

“To seriously get anything done within a school, we have to be responsive to our students,” Haney said. “I was interested in any way possible to get involved with students.”

Beyond his role as a liaison between students and administration, Haney serves as a co-sponsor for Fostering Intercultural Respect and Empowerment (FIRE), a student organization that promotes the message of inclusivity with a focus on race and culture. Although FIRE is operating differently than in years past, Haney and the other members continue to actively cultivate a welcoming school environment for all students, regardless of their backgrounds.

For Stella Tapia ’22, a member of FIRE, Haney’s leadership has been a much-needed change. In the years past, the club has always revolved around public forums of student-led discussions. However, with Haney now representing the administration, FIRE has become a springboard for implementing schoolwide changes.

“We now have this new EDI Director whose sole job is to facilitate our club’s mission in the school and to have a say in administration,” Tapia said. “We’ve become more official, we’ve become more recognized throughout the school.”

FIRE’s new agency has translated over into various accomplishments, most notably the establishment of a monthly public forum in which members of the Stevenson community brainstorm realistic strategies to promote interpersonal awareness. This forum, called Helpers in Equality and Racial Diversity (HEARD), is hosted by representatives from SHS Clubs for Change, a collection of different student-led organizations such as National Honor Society, Freshman Mentor Program, Student Council, FIRE and Diversity Council.

Every month, Tapia, Pattabiraman and other members of SHS Clubs for Change meet to expose issues that impact Stevenson students. These identifier meetings are then used in discussion at official HEARD meetings where potential solutions are proposed. For example, HEARD recently developed an inclusive holiday calendar to help students struggling with the stress of balancing schoolwork and religious or cultural commitments.

Diversity Council President Sneha Mohan ’21 played an important role in the development of this calendar. She has worked with other HEARD participants to fully encapsulate every culture and religion so as to build schoolwide awareness.

“As Diversity Council, we’re kind of leading that initiative to create more awareness about different holidays that are happening with all these different cultures, not just the ones that are officially given off by the school board,” Mohan said.

Further, HEARD has also had a role in renovating the Student Guidebook at Stevenson. Spurred by a nationwide increase of hateful messages, HEARD members collaborated with the administration to update the Student Guidebook, amending Stevenson’s rules to reinforce the punishments for hate speech.

“The [hate speech consequences] we have right now aren’t really that strict and prevent people from actually understanding the reason behind why the hate speech is so hurtful,” Mohan said. “It doesn’t stop them from doing it again.”

These ideas will be brought up once again in April when the administration annually reviews the Student Guidebook. Stevenson Assistant Principal Ken Latka attends these meetings, though this year he plans to also invite members of HEARD.

“We want to amplify voices and provide platforms, [so] we have students and teachers and parents come to these meetings and we take their input to tweak and modify [the Guidebook],” Latka said. “The person who spoke at the HEARD meeting is going to have a prominent seat at that table.”

In addition to updating the Student Guidebook, other schoolwide changes are set to occur, including enrolling more teachers in Equity, Race and Diversity (ERD) training. Seeking to instill cultural sensitivity in and out of the classroom, ERD training is an opportunity for all teachers to dive into relevant topics such as bias, systemic racism and identity.

English teacher Dr. Jennifer Arias is currently in her third and final year of the ERD program. With her knowledge and experience, Arias believes she has not only created a more comfortable classroom environment, but has also recognized the importance of a diverse curriculum.

“There are a lot of… good discussions among educators about how we create a more equitable environment for all of our students,” Arias said. “What are the big ways that might shape our curriculum? What are the small ways that we might… heighten our sensitivity, connect with our students, understand where they’re coming from?”

Although the class Arias mainly teaches, AP World Literature, already encompasses a variety of diverse voices, she always strives to add more. One way she has accomplished this is by gathering feedback from students’ in-class reading experiences via discussions and surveys. On a larger scale, the English department has surveyed students across all levels of English in recent years to determine which voices the curriculum must include.

“I’d like to say it’s a shared endeavor,” Arias said. “Students share their voices and opinions about what they read… [We] come together and really think about what’s best serving our students.”

“There was dissatisfaction in the way that we have handled instances of racial bias or racial harassment and racism in general here at Stevenson,” Haney said. “My job is to help us be more responsive. I hope that so far I’ve been doing that with the help of so many people here at SHS.”