While freedom has long been a deeply valued virtue, recent events—including the politicization of the COVID-19 pandemic—have called into question how unchecked free expression from prominent figures pose a threat to the public. In response to such concerns, Twitter has outlined a new policy to curb the spread of misinformation to protect public confidence in the upcoming presidential election and other civic processes.

In May, Twitter first flagged one of President Trump’s tweets regarding mail-in ballots for the upcoming election as containing misleading information, adding a tab of expert-sourced counter arguments for viewers to open. This action was met with swift backlash from the Trump administration, and the President signed an executive order aiming to draw back on legal protections for social media companies regarding censorship. Despite the threat of lawsuits, Twitter has recently announced further initiative to crack down on the increase of misleading information.

When President Trump posted a tweet in August stating that ballot drop boxes weren’t properly sanitized and potentially used for fraud, Twitter was quick to hide the tweet behind a notice warning users of guideline violations regarding civic and election integrity. In an escalation of their efforts to prevent the message from spreading, Twitter furthermore restricted other users from interacting with the tweet.

“You may not use Twitter’s services for the purpose of manipulating or interfering in elections or other civic processes,” Twitter stated in its updated Policy Pages of September 2020. “We may label and reduce the visibility of…content that may suppress participation or mislead people about when, where or how to participate in a civic process.”

While some might consider these changes to be an overstep of Twitter’s power as well as a partisan action, the company sees themself as taking a more neutral stance on the matter by suggesting that users conduct their own investigations. Some people agree, as according to an MIT study from 2018, false news travels 6 times faster on Twitter than truthful news.

“[Fact-checking] does not make us an ‘arbiter of truth,’” Twitter CEO Jack Dorsey said. “Our intention is to connect the dots of conflicting statements and show the information in dispute so people can judge for themselves.”

In the status quo, social media companies are able to restrict “obscene, lewd, lascivious, filthy, excessively violent, harassing or otherwise objectionable” material under protection from libel lawsuits from users who post such messages on their platforms, according to Section 230 of the Communications Decency Act.

Nevertheless, Trump has continued to deny any fallacies in his tweets, instead accusing Twitter of bias against him and retaliating with an executive order. Under his executive order, social media sites could lose their legal immunity if it’s determined that they have performed inappropriate editing, deemed as restricting access to content beyond removing the types of objectionable content detailed in the law.

Peter Anderson, a U.S. history, law, and government teacher at Stevenson, believes that the President’s retaliation showcases a significant power struggle between his administration and Twitter.

“As I understand it, and I can’t speak exactly to the President’s motives, it seems that President Trump is using this Executive Order to signal to his supporters that these companies are illegitimate or corrupt,” Anderson said. “Based on my understanding of how the current laws are set up, the order would seemingly have little or no legal impact but it seems his intent is weakening the power and influence of companies that could, in theory, weaken his political power.”

However, with the effects of the COVID-19 pandemic still prominent across the US, the reliability of the information relayed from the President to the people has been called into question, especially as many blame the Trump administration for downplaying the threats of the virus. Coupled with the upcoming election and Trump’s recently flagged tweets regarding his qualms about the unreliability of mail-in voting and encouragement for his supporters to vote twice, the threat that misinformation poses to public safety and the democratic process has become spotlighted in the national conversation like never before.

As a former West Wing spokesperson under the Obama Administration, Frank Benenati stresses the serious implications complete freedom of speech could have in the hands of political leaders, especially in the digital age.

“This type of unchecked power of persuasion that leaders have through social media—both in America and around the world—is not only making people more hateful and more distrusting of the information they are seeing, but more distrusting of even their friends, family, and neighbors,” Benenati said.

Benenati believes it is crucial that prominent figures in politics, specifically President Trump, are giving the truth to the people of their respective nation. This idea has greater relevance considering that social media is one of the main ways that Americans receive their news and information.

While aware of the fact that it will be extremely difficult for social media companies, specifically Twitter, to be able to go over every single tweet posted on the platform, Benenati does feel that these companies should be held responsible for fixing the holes they’ve created where false information was spread.

“It should be their role to at least try. I understand that it is no easy task to filter every post, it seems like an almost impossible task,” Benenati said. “But the social media companies have opened this Pandora’s Box and it is up to them to help fix it.”

With users sharing, interacting, and retweeting posts, social media has acted as a catalyst for false news to spread. Anderson echoes a similar sentiment, emphasizing the importance of accessible, unaltered information for the American people, especially in the digital age.

“As somebody who wants an informed citizenry, I would hope that there’s truth,” Anderson said. “Whether that’s Zuckerberg or Dorsey’s job, I would hope they would take that responsibility.”

For young people growing up surrounded by technology, their exposure to informati 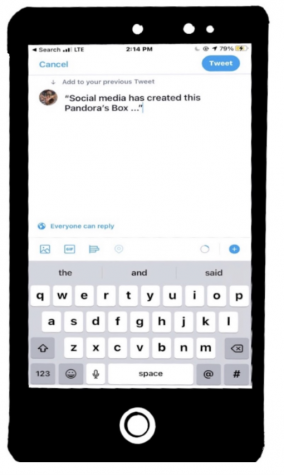 on from social media sources can play a critical role in the development of their political perspectives. With this in mind, some students believe that it is Twitter’s responsibility to protect their users by hiding inaccurate information which can interfere with the development of an accurate political mindset for the youth.

“I think the average student thinks that misleading stories overall just make it incredibly difficult to create your own [political] identity,” said Daniel Ro, the Vice President of Law Club and a varsity member of Stevenson’s Mock Trial team. “So in that situation, I’d say some students would want those misleading stories to be banned for [being] fake news.”

In the midst of an especially tense political climate of which the idea of “truth” holds a new subjective and sensitive nature, Anderson reiterates the reliability of information as a key pillar in preserving the people’s voice, largely due to the trust people have historically had to put in the media they consume.

“We used to rely on the media as the watchdog to expose what was going on in politics, this is really the first time that I can think of where the media is being called out as the enemy that can’t be trusted,” Anderson said. “ Credibility is crucial because if we’re being told we can’t trust the media, we’re literally left with this question of well, who then do we trust?”