The junior’s clutch shot against Mundelein has eclipsed 3,000,000 views on Instagram. 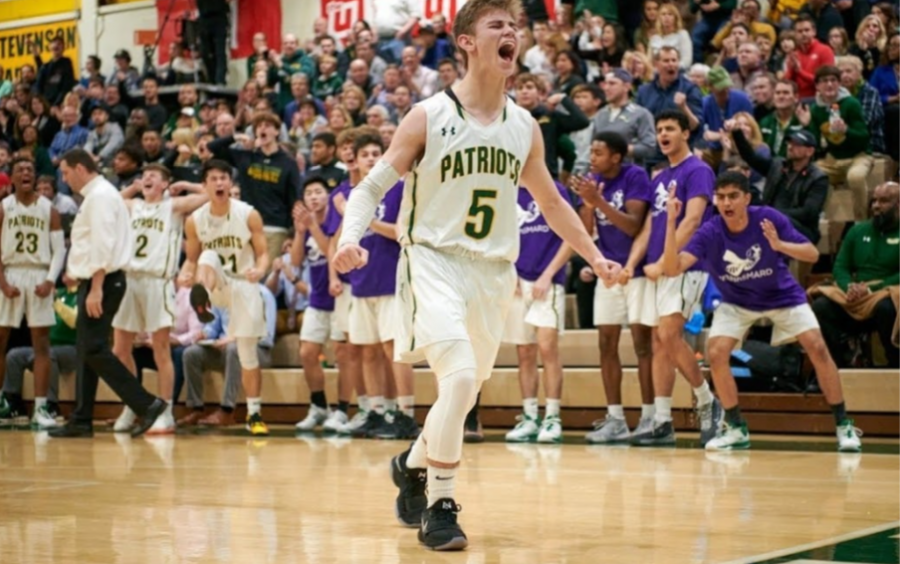 Even though Stevenson’s boys basketball team could not complete its stellar season due to the COVID-19 pandemic, the squad enjoyed tremendous success; under coach Pat Ambrose’s guidance, the Patriots went 28-4, ranked 12th in Illinois per MaxPreps and reached the Prospect Sectional Final against rival Mundelein.

Speaking of Mundelein, one of Stevenson’s biggest highlights of the year came against the powerhouse Mustangs.

In a Valentine’s Day date at Mundelein, starting point guard Evan Ambrose ’21 sank a pair of free throws after being fouled by his former green and gold teammate, Trey Baker, to give Stevenson a 50-49 lead with just 1.7 seconds left in the game.

What makes Ambrose’s clutch feat even more impressive is that he was unfazed by chants of “Daddy’s Boy” by a raucous Mundelein crowd. Ambrose is the youngest son of Stevenson’s venerated head coach.

The Patriots went on to win the game by the skin of their teeth and advance to 2-0 against Mundelein on the season. Ambrose ended the contest with just 6 points, but none was bigger than his final shot from the charity stripe.

Video of Ambrose’s free throw was uploaded to Instagram on February 14 and had gained recognition among the Stevenson community. However, some two and a half months later, the shot began to truly skyrocket in fame.

On May 21, Instagram account BreakAnklesDaily —with 1.9 million followers —posted the clip, which totaled more than 142,000 views. Subsequently, Ambrose’s dagger was posted on Instagram accounts with even more notoriety, including Overtime (over 982,000 views) and even ESPN’s SportsCenter profile (more than 2.2 million views).

In total, the video has over 3.3 million views and will surely continue to rise in popularity.

Much like his famous shot, Ambrose will be the subject of the spotlight next winter. He will be the only returning starter for the Patriots after the departures of Matthew Ambrose ’20, John Ittounas ’20, Matt Kaznikov ’20 and R.J. Holmes ’20, all of whom will suit up to play collegiate basketball for the next 4 years.