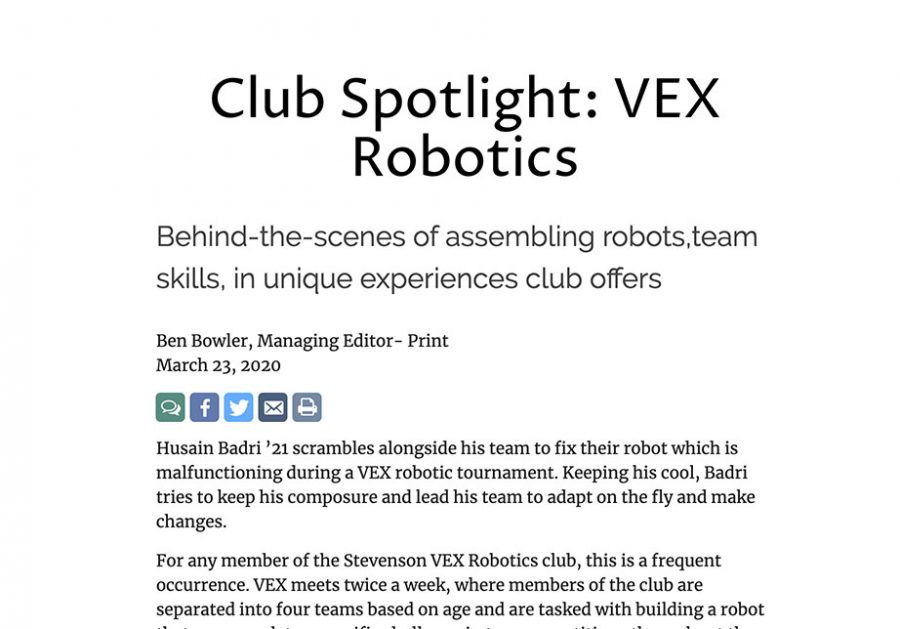 Husain Badri ’21 scrambles alongside his team to fix their robot which is malfunctioning during a VEX robotic tournament. Keeping his cool, Badri tries to keep his composure and lead his team to adapt on the fly and make changes.

For any member of the Stevenson VEX Robotics club, this is a frequent occurrence. VEX meets twice a week, where members of the club are separated into four teams based on age and are tasked with building a robot that can complete a specific challenge in two competitions throughout the year, with a potential third competition if a team qualifies for state.

For Badri, there were multiple reasons that made the club appealing to him.

“When I was in middle school, VEX came to my school and did a presentation,” Badri said. “The idea of being on a team and building things was interesting and caught my eye, and in middle school I had interest in LEGO so VEX Robotics was the perfect club for me to join.”

Like Badri, Brandon Lu ’21 is also a member of VEX Robotics. Lu believes that VEX complements the engineering classes he has taken at Stevenson by offering a different environment.

“It’s a hands-on way to try something in the engineering process that’s really unique,” Lu said. “You get to experience the process for yourself as opposed to just learning about it.”

According to co-sponsor of the club Michael Anderson, much of the teams’ success stems from dynamics between individual members. He believes that each person needs to fulfill a specific role.

“We can put together the most brilliant set of engineers but they have to be compatible,” Anderson said. “We have builders and programmers, but we also need drivers that, when the timer is going down, can stay calm and execute what is programmed for them. It’s all these cool skills coming together for competition.”

In the world of VEX Robotics, Anderson thinks that it is safe to assume nothing will go as planned. He believes that this creates a learning curve for newer members of the club.

“You’re at those competitions and things don’t always go as planned,” Anderson said. “Nuts and bolts are flying all over the place, things are failing and shorting out, and a new team can’t know what that’s like until they experience that. It lights fire under them to be more prepared for the next competition.”

For Badri, this spontaneous atmosphere furthered his desire to create a strong foundation for a team. His goals extend beyond creating the most qualified robot.

“This year, we tried to have the club work as a team environment,” Badri said. “Lots of times with the name of Stevenson you get the idea of winning, but this year we focused one not just on winning but learning something from this and learning to communicate and talk with everybody.”