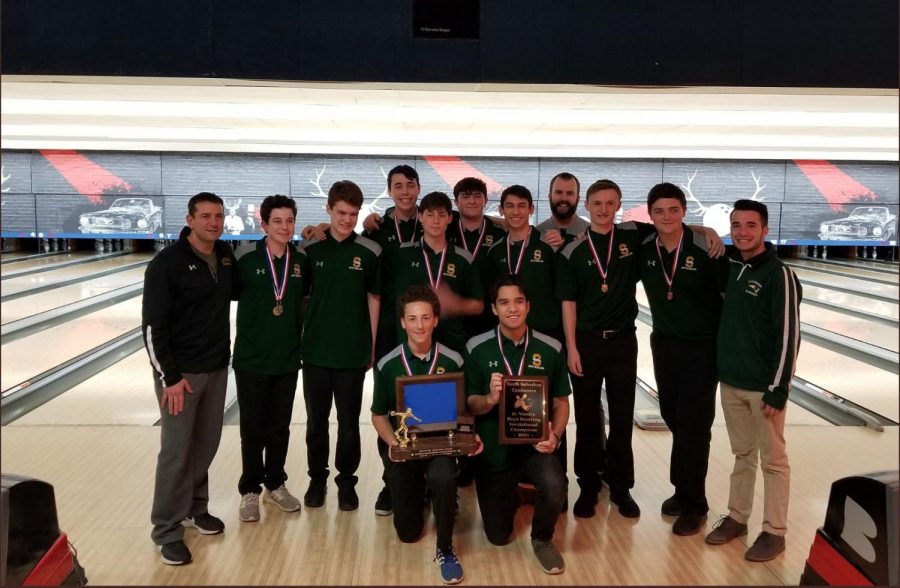 For many, bowling serves a casual, fun reprieve that allows for better connectedness with friends and family. But for Stevenson’s boys’ bowling team, the clanking of pins and accumulation of points means so much more.

Though the team finished 17th overall and did not participate in the second day of competition, Stevenson’s State trip was highlighted by an achievement unlike any other in school history.

Around 4.5 hours away from where the team normally practices—Fairhaven Lanes in Mundelein—Grabiner bowled a perfect 300, the first Patriot to do so at State in program history.

“Thinking about all the hours I put in to reach my goal of going to State, it meant the world to me that I was able to accomplish that feat,” Grabiner said.

Grabiner was far from the only Patriot bowler to flourish this season. Lerman also posted a 290 during the team’s trip downstate, and Grabiner, Lerman, Sternes and Starr each won individual tournaments over the course of the year.

Despite long-standing success in 2019-20, this year’s trip to the State tournament was especially meaningful due to Stevenson not advancing past the Regional stage a year ago.

Grabiner accredits much of his success to Mathias, who has compiled a 50-14 record in his tenure thus far.

“When I first came to the team, I had no bowling experience and had never competitively bowled in my life,” Grabiner said. “My average was under 100, and now it’s close to 210.

“All of my knowledge is thanks to Coach Mathias and my teammates who also helped me grow into the bowler I am today,” Grabiner said. “There is a reason Coach Mathias is the winningest coach in program history; he really developed all of us into great bowlers, physically and strategically.”

Mathias has accumulated a plethora of awards thus far, including a 2020 North Suburban Conference title and a Regional title in 2017 (as well as this year). But arguably nothing was more impactful to the former two-time Carthage College bowling captain than winning it all as a newcomer to Lincolnshire in 2016.

“[Winning State is] something that I’ll never forget and especially will never take for granted because some people could coach for 20 years and never even make it to State,” Mathias said. “I’m just trying to use that experience each and every year so that we can win another [State championship].”

In 2019-20, Mathias was joined by former Patriot bowler Zach Singer ’16 as a volunteer coach. Singer claimed the individual State Championship in 2016 as well as rolled three perfect games during his Stevenson career. Singer now bowls for the Purdue University Intercollegiate Bowling Club.

Part of the reason Mathias’s team has performed so well is bonafide camaraderie.

Grabiner noted that three of the varsity members have worked closely over the last three years and spend nearly 20 hours per week alongside one another. Despite being a newcomer, Starr echoed this sentiment.

“Everyone was very inclusive, so I just felt like a part of the team,” Starr said. “I think that I grew closer to all of my teammates [at State] and learned more about them by seeing them in a different environment.”

Although they did not return home with a first-place trophy, optimism abounds for this squad.

Grabiner explained that he and the other varsity members intend to bowl regularly in the off-season to maintain their chemistry. Additionally, the close-knit nature of Mathias’s team may be enhanced due to not losing any players because of seniority.

“We are one of the only teams in the state that didn’t graduate any seniors, so if we can stay focused on the goal and make every shot count, we have a great shot to win State,” Grabiner said.

Likewise, Mathias strives to improve upon this past season in order to return to the glory of four years past. In order to reach these heights, Mathias has one overarching message that he hopes to imbue in his team as they regroup for 2020-21.

“Keep practicing, keep getting better,” Mathias said. “You want to have that internal drive. Self-motivate and become better even when you’re not getting pushed to get better.”