Chick-Fil-A announces cease in donations to organizations known for being anti-LGBT, raising questions over whether words can be trusted 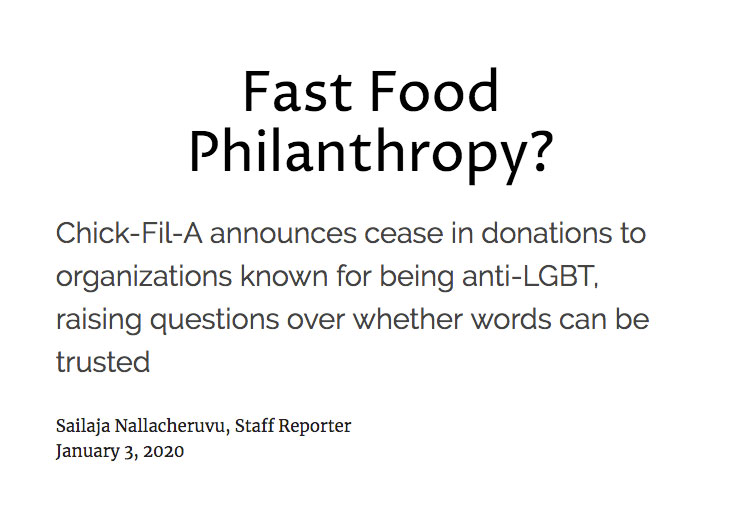 On November 14 2019, on Waukegan Road in Deerfield, a new Chick-Fil-A branch was opening—the first in the area. While the opening brought about 25 customers to the location, by afternoon, around 46 protestors had already been to the area to express their discontent with the new store.

Later that month, on November 18, 2019, Chick-Fil-A announced that it would no longer donate to two Christian charitable organizations that were recently condemned for being anti-LGBT. Instead of donating to the Salvation Army and the Fellowship of Christian Athletes, Chick -Fil -A has promised $9 million to Junior Achievement USA, Covenant House International, and 120 small food banks across the country.

The Salvation Army, which has been recognized as discriminatory by certain groups, has since stated that they do not discriminate based on sexual orientation and do their best to provide support to all people. The Fellowship of Christian Athletes has been denounced for spreading anti-LGBT messages to its athletes and maintaining a strict “sexual purity” policy for its employees.

Despite a 2016 report from ThinkProgress that Chick-Fil-A had promised to reduce funding to discriminatory groups, a study from Technomic showed that the company, which generated $9 billion in sales in 2017, donated $1.8 million to potential hate groups in the same year.

This history has left certain individuals unwilling to buy from or trust Chick-Fil-A’s policies. William Fritz, a co-sponsor of Gay Straight Alliance at Stevenson High School, is one of those individuals-though he recognizes that private organizations have the right to spend their money the way they see fit.

“As consumers I think we have a moral obligation to pay attention to where our money goes,” Fritz said. “We don’t get a free pass for corporations doing something we are opposed to if we didn’t care about the consequences of our spending. As a gay male, I don’t have the luxury of not paying attention as the money I spend has, historically, been used to hurt gay populations.”

Both the restaurant chain with more than 2300 stores nationwide, and its CEO, Dan T. Cathy, who is a Southern Baptist, have historically been criticized for his comments opposing same sex marriage in June 2012 to a Baptist news magazine, such as he was “guilty as charged” in response to a question about supporting the “traditional family”.

As the company expands internationally from its headquarters in Atlanta, it has been exposed to protests and demonstrations globally, sometimes causing the restaurant’s franchises to shut down. In London, LGBTQ protests in October 2019 immediately followed the opening of the first Chick-Fil-A of the UK, forcing the restaurant to announce that it would shut down that branch within 6 months.

Moreover, multiple cities in the U.S. have blocked Chick-Fil-A from opening chains in their airports due to their history of anti-LGBT actions. In Chicago’s Logan Square neighborhood in July 2012, the former alderman chose to block Chick-Fil-A’s permit in the city, and a 2019 opening in Deerfield was met by a crowd of protesters throughout the day.

Marla Israel is a co-sponsor of FIRE, a club which  creates conversation between different cultures, and she believes that this is only a natural reaction from consumers who have different ideologies than the executives of Chick-Fil-A.

“The owner of Chick-Fil-A has the right to choose where to spend the money,” Israel said. “On the same token, it is absolutely important for young people to understand that where they spend their money is often a reflection of their values.”

Some students, like Deepti Ayyappaneni ’21 believe that corporations have no obligations to donate to charities and should only be focused on producing profit. However, she also thinks that if organizations are supporting potentially biased groups, both the school administration and the press have an ethical responsibility to make students aware of these situations and their real-world implications.

“Although school might be commonly viewed as syllabus-based and book-dependent, I believe it is quite important that schools promote awareness by fostering debates over these issues in classes or having speakers with knowledge of the subject come in to share their experiences,” Ayyappaneni said.

At the end of the day, the choice of consumers can influence how  corporations, even private ones, spend their money. According to Israel, this is why both the press and corporations have a responsibility to be transparent to the public.

“The role of the press or other institutions is not to cancel certain organizations based on their owner’s beliefs,” Israel said. “It is to present the information and then trust that the citizenry can make up their own mind about how to spend their money.”