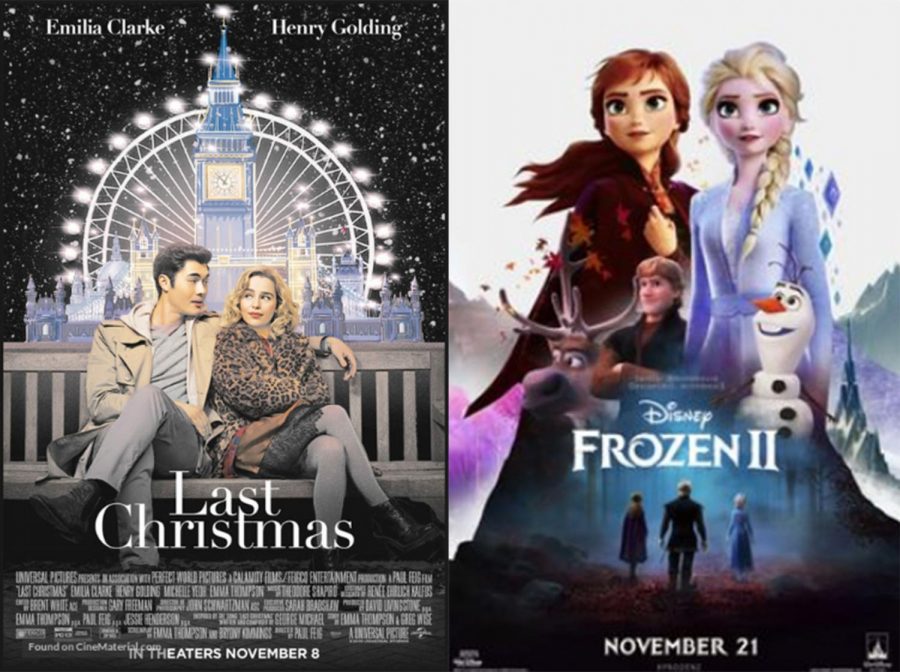 Last Christmas:
Anyone who knows me knows that I love a great romcom. So when I found out Last Christmas was coming out, I was elated: it seemed like the perfect movie for the upcoming holiday season: a feel-good, happy romantic comedy—the type that you want to watch while you’re cuddled up next to a fireplace holding a hot chocolate. To top it all off, the cast seemed incredibly promising. Crazy Rich Asian’s Henry Golding and Game of Throne’s Emilia Clarke were sure not to let me down… right?
Unfortunately, I was mistaken. Like Clarke and Golding’s extremely underwhelming chemistry, the entire premise and plot of the movie felt forced.

Clarke stars as Kate, a wannabe actor, who is initially portrayed as homeless, selfish, and, to put it lightly, a hot mess. One day, while working at her Christmas shop, she stumbles upon a man named Tom, played by Henry Golding. Tom is oddly delightful in every way: he walks looking up at the sky, locks his phone in a cupboard, and disappears for days without any warning, none of which seem odd to Kate, who allows Tom to take her on adventures around London’s various shady alleys.

The first 90% of the movie is typical of just another rom-com, in that Kate and Tom fall in love in a matter of days after some uneventful romantic pursuits, and in the process, Kate undergoes some serious character development. Yet, the end of the movie features a supposedly unpredictable plot twist that simply feels unnatural.

While aiming to be emotional and moving, the movie only left me feeling disappointed as I walked out of the theater. For whatever reason, I didn’t find myself sympathizing much with Kate, nor did I find myself rooting for the main couple the way I typically would.

Needless to say, this movie did not meet my expectations in the slightest. If I could give you any advice, don’t waste your time on this movie. Stay at home and watch Home Alone instead.

Frozen 2:
Like any ten-year-old in 2013, I was obsessed with Frozen. Anna and Elsa were my role models and “Let it Go” was my life anthem. Six years later, when I first saw the trailer for Frozen 2, I hoped and prayed that it would live up to its predecessor.
Luckily, Frozen 2 did not disappoint. It started off returning back to the lovely kingdom of Arandelle that Frozen fans all know and love, complete with the whole gang: Anna (Kristen Bell), Elsa (Idina Menzel), Olaf (Josh Gad), Kristoff (Jonathan Groff), and Sven. The characters from Frozen 2 are familiar enough to trigger nostalgia in former Frozen lovers, but, like the audience that followed them, they have also matured throughout the years. Olaf is now surprisingly insightful, yet still possesses childish qualities that fans adore. Kristoff finally decides to tie the knot—but stumbles in the way in which he should propose to Anna. And, of course, Elsa is as elegant as ever, and noticeably happier than she was in Frozen.

Yet, they are not living happily ever after, as the first movie would have you believe—Elsa, at times, hears a singing voice calling out for her, threatening to ruin her comfortable life within her castle. This voice eventually leads her, as well as the rest of the gang, into a mysterious enchanted forest, where they meet both the indegenious people of the forest as well as soldiers from Arandelle who have been trapped there for years.

Frozen 2 takes viewers on an adventure of a lifetime, and, along the way, teaches lessons about the importance of forgiveness, love, family, and the preservation of nature. It’s an enjoyable movie for adults and children alike, regardless of whether or not they were a fan of the first movie. And although it’s hard to compete with Frozen’s soundtrack, I found myself jamming out to the songs from Frozen 2 for days after seeing the movie.

All in all, Frozen 2 is the perfect winter movie to see with your family and friends, and, if you are not feeling it already, it will be sure to leave you feeling a bit chilly afterwards!