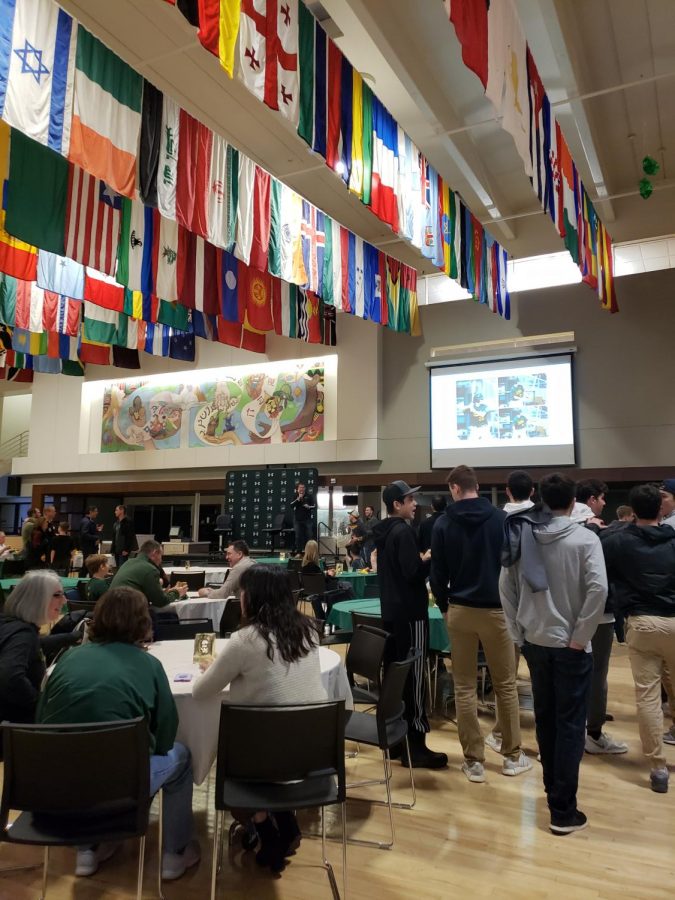 New head baseball coach Nick Skala reveals the winners of the raffle prizes at the end of Coach Swan’s special ceremony. Swan’s family, friends as well as former and current players and coaches attended the historic event and frequently congregated near the drawing’s potential rewards.

When Paul Swan applied for a coaching job at Stevenson High School 50 years ago, the second Super Bowl had just concluded, Martin Luther King, Jr. was recently assassinated, and Apollo 8 became host to the first men to land on the moon.

But half a century later, Swan’s adoration for his craft—coaching—has not waned a bit.

“Since I retired, I’ve always considered coaching as my hobby,” Swan said. “I don’t play golf or hunt or fish.”

In a somewhat poignant ceremony on December 15th, Swan was celebrated in honor of his tenure of coaching at Stevenson; the event incorporated interviews with current varsity baseball players Jacob Rosenkranz ’19, Christopher Farina ’19, Hayden Brotz ’19, and Michael D’Angelo ’19. Additionally, the event featured remarks from new varsity baseball coach Nick Skala as well as a raffle for its culminating moment.

As a testament to Swan’s impeccable memory, Swan identified four of his alumni solely by listening to their voices; afterward, they each embraced upon the central stage.

“He [Swan] is just a pillar of our athletic department and a great friend as well,” Betthauser said. “Someone who can always make a not so great day one of the best you’ve ever had.”

Though Swan’s list of roles has made him pervasive within Stevenson, he, arguably, is more revered for his charisma and mentality—concepts that have resonated with those who have played under him.

“Coach Swan is just such a positive person with his jokes and humor, and it rubs off onto other players,” varsity point guard Jack Xiao ’19 said, who also touched upon the “Hip, Hip, Hooray” chant that Swan leads after victories. “He really believes in togetherness and being positive, and I think the importance of these ideas definitely translates off the court for different team settings.”

Since 2002, Swan has split his time between Lincolnshire and St. Paul, Minnesota, where he serves as a running backs coach for the Division III Bethel University Royals. “Swanee,” as he is known, explained that he temporarily resides with his son during football season and then returns to Stevenson when basketball commences.

“It’s a pretty easy transition from one to the other, so I always look forward to getting back to getting started with basketball,” Swan said. “Then August comes, I’m really anxious to do football.” He also added that he typically has to miss the first week of basketball season each year.

Though Swan has enjoyed a lengthy high school and college coaching career, he swears that he has never pondered venturing to professional sports. Additionally, he cannot select an all-time favorite sport to coach: he takes pleasure in each of their respective seasons.

“He continues to be someone that will pick up the duties that need to be done,” Betthauser said as she emphasized Swan’s importance in a myriad of sports. “He’s very, very important to everything that happens on the staffs that he serves on.”

Even when—or if—Swan leaves the Patriot program, he will have forever imprinted himself upon not just Stevenson’s players and coaching staff, but the very spirit that embodies the school.

Despite a night that celebrated his own feats, Swan’s humility and desire to give back shone through. When asked about one maxim that he attempts to share with his players, Swan said:

“Be grateful and give your tips away to your teammates without expecting anything in return.”