Fart noises and laughter made Friday night’s production of “Shrek” jolly fun, but the strong cast and crew is what brought this tongue-in-cheek fairytale from the studios of DreamWorks into a heartwarming and fantastically technical production. 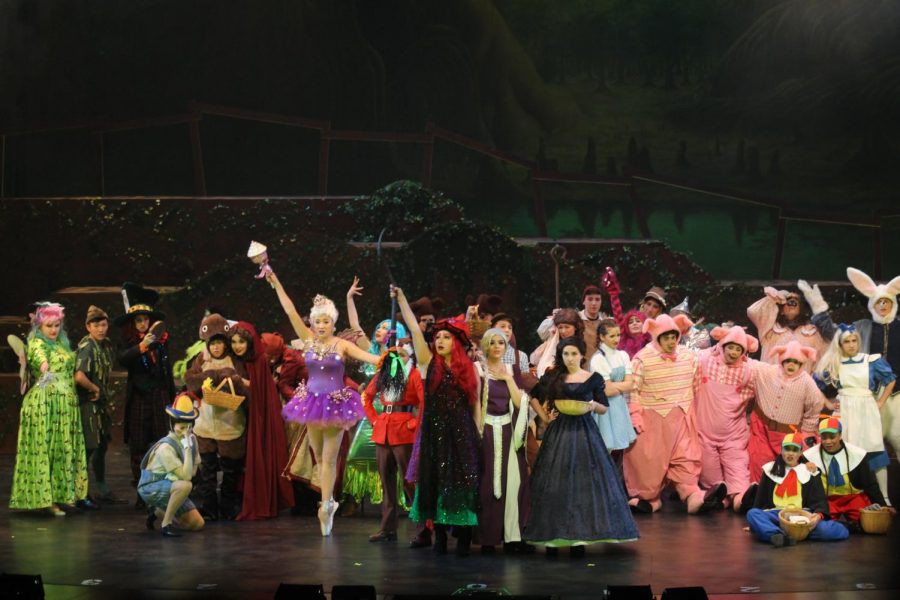 Adapted from the beloved childhood film, it is no surprise more anticipation surrounded this musical than any others in Stevenson’s recent history. Set in a sort of backwards fairytale land, Shrek (Ethan Murphy) is a feared ogre who lives the life of a recluse until Lord Farquaad (Matthew Zimring) orders all fairytale misfits to be relocated out of the kingdom of Duloc and into Shrek’s swamp. Dissatisfied with this arrangement, Shrek sets out to rescue the Princess Fiona (Isabel Koleno) alongside a spunky talking donkey (Chris VanOverberghe) in exchange for gaining back his swamp.

With a striking stage presence and stellar comedic flair, Murphy tackles the feat of convincing an audience he is in fact the lovable Shrek from our childhood. His playful, but also layered (like an onion) portrayal of an ogre haunted by the terror he causes takes us on a journey with him to self discovery. Through Murphy’s musical number “When Words Fail”, he proves himself to be a powerful actor in command of his character’s transformation from living a life of isolated bliss into a beloved anti hero. To aid in his transformation, makeup artist Ella Kalis convinces us Murphy is of ogre descent from even a few rows away. As Shrek falls in love with the Princess Fiona, we fall in love with him.

Along the journey, an unlikely friendship is formed with VanOverberghe as the rambunctious Donkey whose snappy one-liners and buoyant stage presence serves as a valuable comedic asset. The chemistry between Shrek and Donkey is paramount considering their banter takes up much stage time and was a casting triumph.

Koleno does not appear until the end of the first act, but the wait is well worth it as her standout number “I know It’s Today” shows off an impressive vocal range. Her vivacious and slightly manic characterization of what could have been a very one-dimensional portrayal of a cursed princess is refreshingly eye-catching.

Starpower was not in short supply. Watching the villainously arrogant Zimring as Lord Farquaad strut on his knees and wish the audience to applaud on his command despite his stature, proved that he indeed has nothing to compensate for in terms of talent. Farquad’s backstory, a characterization not revealed in the film, allowed for an element of surprise in a show where many iconic movie lines are recycled.

“Shrek” also differed from many past Stevenson productions in its impressive technical feats. Watching Pinocchio’s (Hanako Walrath) nose stretch and the rigging that enabled the Dragon (Francesca Walsh) flight was no doubt complex and executed effortlessly. Who could forget Walsh’s memorable soul-inspired showstopper “Forever” that lit up the stage, and with not just her illuminated costume?

Alongside a supporting cast with just as dynamic acting chops and vocals as the main cast and a pit orchestra who went perfectly unnoticed, “Shrek” was a grippingly hilarious success for first-time Stevenson director Abra Chusid. Although set in a land far far away, the lessons on inner beauty and friendship hold true for any Stevenson student.