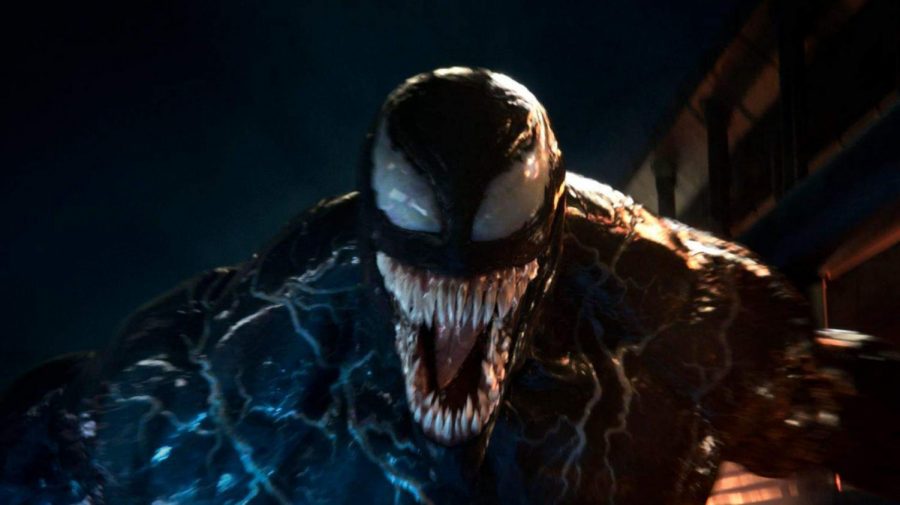 For better or for worse, Hollywood’s biggest blockbusters are dominated by comic book movies. Films like “Guardians of the Galaxy,” “Black Panther,” and “The Dark Knight” have raised the bar for what these movies can be, demonstrating storytelling and filmmaking that stood above the competition.

Not only does “Venom” fail at reaching these standards of a modern comic book movie, but it almost fails at meeting any expectations whatsoever. It’s such an incoherent mess that I can’t help but be amused by its absurdity.

One of the many baffling things about “Venom” is how badly it botches such a simple premise: Journalist Eddie Brock (Tom Hardy) attempts to uncover secret tests run by Life Foundation CEO Carlton Drake (Riz Ahmed), but Brock soon finds his very own body merged with an alien symbiote, leading to the birth of the anti-hero Venom.

Before Venom arrives, the movie is the equivalent of a cinematic sleeping pill. Everything feels generic and uninspired, offering nothing worth caring about or any semblance of personality.

However, once Venom makes his long overdue arrival, everything becomes so over-the-top that it it felt like I was watching a campy B-movie. This actually worked in the film’s favor, as I couldn’t help but be entertained at the awkward bromance between Brock and Venom.

Is “Venom” the story of a gritty anti-hero? Is it a Tom Hardy standup special? Is it a Comedy Central roast session in which Venom insults Eddie Brock? I’m not sure, and I’m not sure anybody making this movie knew either. I found myself constantly laughing throughout the film, but it’s hard to even identify what’s intended as comedy.

I’m convinced that this movie was initially supposed to be dark, but Hardy quickly realized the disaster the movie was becoming, so he decided to improvise a performance as absurd and eccentric as possible to keep the audience entertained. It’s clear that Hardy is giving it his all, and he’s the only reason “Venom” is remotely watchable, even if it feels like he’s in an entirely different movie.

Other members of the cast? Unapologetically wasted. Talented actors such as Riz Ahmed and Michelle Williams are given characters so one-dimensional that they feel more like plot devices than they do people. Their respective performances are half-baked at best, a clear result of them losing faith in the project during production.

More than anything, “Venom” just feels sloppily made. The editing is awkward, the dialogue is awful, and the action is…oh, man, the action.

Let me put it this way: If I were to write an SNL skit that parodied everything wrong with the way action movies are filmed, it would look something like the action scenes in “Venom”.

Many are upset that “Venom” is a PG-13 movie for an R-rated character and that it is a Spider-Man spin-off without Spider-Man. Yes, these glaring issues highlight the film’s identity problems, but the reality is that no amount of fan service could have saved it.

This movie should have given the character of Venom its proper introduction on the big screen (we don’t talk about Sam Raimi’s “Spider-Man 3”), yet the end result is anything but. “Venom” can be treated as a campy movie that is fun to laugh at during midnight screenings, but is our bar really that low? Much like its titular character, “Venom” is a parasite, and I wouldn’t advise you to let it anywhere near your body or your time.