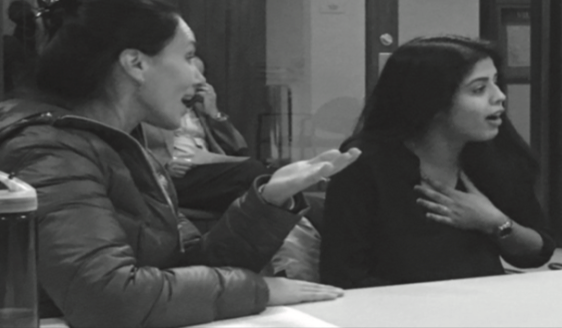 In January, Ananya Pati ’18 was named a Trainer of Training (ToT) by Community Anti-Drug Coalition of America (CADCA) for her work as a co-leader of Stevenson’s anti-drug club Catalyst and being part of Stand Strong Coalition, the adult group of Catalyst.

“It was an honor to win the award, but it was also alarming because it was the first time I sat back and realized the impact my work had,” Pati said.

Pati did not know she had won until she was surprised at a Stand Strong meeting. The Coalition told her she needed to bring her parents to the meeting, but would not tell her why, she said.

“When I received the award, I was genuinely speechless,” Pati said. “I have pictures of me just holding my hand over my heart. Overall, it was amazing, but shocking.”

According to Cristina Cortesi, substance abuse prevention coordinator and co-sponsor of Catalyst, Pati is a role model and a joy to work with.

“She has been very purposeful about what changes need to happen,” Cortesi said. “She is also making sure the school community has a positive perception about [the club].”

Pati is working to show her peers that Catalyst is not about intervention or getting anyone in trouble, but about preventing drug use to start with, Cortesi said.

Cortesi has very high expectations for Ananya, but she feels that the expectations will be met. Pati has constantly taken the skills she has learned from other groups and applied them to Catalyst. Pati had been in Stand Strong before joining Catalyst, and is now the link between the two.

“[I told her to] keep relying on [her] passion for [drug prevention],” Epstein said. “There will always be someone smarter, more educated and more experienced, but passion will give success.”

Epstein said that she has never seen anyone like Ananya before, with the passion, dedication and the ability to keep growing, succeeding, and move up in the ranks.

Pati has considered a career in public health, but she is also very business-oriented. She does not know at this time which field she wants to go into, but she knows that drug prevention will be a part of her life no matter what she chooses.

“I was lost as far as who I was and what my passion was,” Pati said. “But once I started getting involved with [drug prevention], I found a home where I could grow and thrive as well as watch others grow and thrive.”