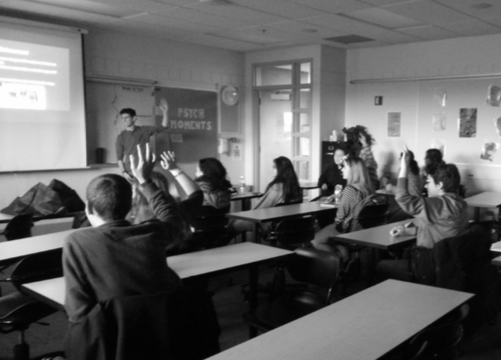 Members of Law Club discuss a topic posed by president Dylan Horwitz ’17. When Horwitz doesn’t present, a professional in the field usually will.

The speaker walks around the room. She talks about how she worked with president Barack Obama when he was a senator, teaching him many of the things that he needed to know on the senate judiciary committee.  The students sit upright, riveted by the story. The story concludes and time for questions is called, hands fly up.

Every other week at Law Club, a speaker is invited to present on their job and the different ways that law is used in their daily life. There is time at the end for any questions the students might have and often times it is interactive and not just a lecture-style presentation.

“Law Club makes its mission to educate students on law and how law impacts them,” sponsor David Elbaum said. “It’s also a vehicle for students to politically express themselves.”

Law Club has become much more popular this year. Members attribute this to the recent presidential election––which has also given a boost in membership to other political clubs at Stevenson as well.

“The club is definitely on an upward slope,” president Dylan Horwitz ’17 said. “Average attendance has nearly doubled since last year.”

Horwitz believes that this upward trend is also attributed to the club’s respectful environment and its unique nature. According to Horwitz, many of the activities they do as a club, such as having discussions and listening to outside speakers, are different from other clubs at Stevenson. Additionally, the club never becomes a place only for those with polarized opinions, Horwitz said.

“I think it’s amazing that I get to see real lawyers come and talk and that we can ask questions and have a conversation with them,” member Emilie Floen ’17 said.

Floen has been to the club a few times and since she first went because her friends told her about it, knowing that she wanted to be a lawyer one day.

On days that a speaker isn’t present, a presentation is given by Horwitz regarding an important legal issue. Afterwards, there is time allotted for discussion.

“It’s very interesting to hear people on both sides defend their arguments in a very civil and intellectual way,” Horwitz said.

Both Floen and Horwitz agree that the club is a very inviting place. Like Elbaum said, it is seen as a place to both learn more about and understand other people’s ideas.