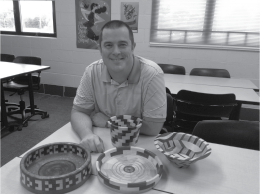 Math teacher Bob Pinta takes a bowl gouge, slowly shedding away at the spinning maple wood to reveal a purpleheart and bloodwood interior. The finished product is a medieval goblet freshly coated in polyurethane.

This love of creating is reflected in his adult hobbies which include painting miniature Dungeon and Dragons figures, playing board games with his daughter, building electronics, computer programming and woodworking. He even picked up the ukulele for eight months.

At one point, David Eddy, physics teacher and head of student activities, approached Pinta on a Thursday requesting that he build a t-shirt cannon. By Monday morning, it was all painted and ready to fire into the crowd.

“I love when people set up rules, and I am able to live in those rules,” Pinta said.

Pinta’s creations can be found all over the school, as he is the proud creator of math teacher David Irsay’s wooden popsicle stick holder, the physic department’s trampolines and science teacher Bryan Wills’s dice bowl made out of dice.

Pinta doesn’t just construct practical items; many of his creations originate from different fandoms. “My friend’s kids wanted to create a sword, the one that Frodo uses,” Pinta said. The sword was real, made from wood, sanded down and then covered in aluminum tape and buffed to give a metallic effect. Pinta believes you don’t need the best quality materials all it takes is a little direction from YouTube and perseverance. “Whenever I get an idea, I usually have the means of making that happen,” Pinta said.

Pinta will glue the wood together then use his bowl gouge to shave the wood into his desired wand shape.

“I am a self proclaimed geek, a lot of my hobbies tend to gravitate towards Star Trek, lord of the rings or harry potter” Pinta said.