Illinois not SAT-isfied with PARCC 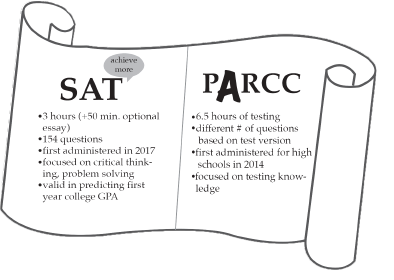 The Illinois State Board of Education (ISBE) mandated that high schools in Illinois administer the SAT as the state-funded college readiness exam starting in 2016-2017. This sudden switch comes after two years of using the Partnership for Assessment of Readiness for College and Careers (PARCC)  at the high school level, and was prompted by public backlash against PARCC.

“I think [Stevenson] is ready to completely support Illinois’ work around the SAT,” said Gwen Zimmermann, assistant principal of teaching and learning. “PARCC was difficult from a logistical standpoint, since it was so long and had so many different parts.”

This made PARCC difficult to administer, said Zimmermann. While this was a major reason behind ISBE’s decision, this was not the only problem with PARCC.

Students knew that PARCC didn’t count for anything other than taking a test, leading to meaningless results, said Mark Onuscheck, director of curriculum, instruction and assessment.

Nair, who has taken both PARCC and the new SAT, said that many students feel like PARCC is not an accurate representation of what they will do junior year.

On the contrary, the SAT is expected to be better for Illinois high schools, as it better tests skills like critical thinking and problem solving. These are key takeaways from Common Core, Zimmermann said.

Onuscheck also emphasized the fact that those skills were more important to students than the knowledge required for tests. After all, that is a primary purpose behind education and standardized testing.

The rewriting of the SAT puts it more in line with Common Core and educators’ latest philosophy of measuring growth over time. Hence, the SAT is expected by the ISBE to be more useful than PARCC in measuring student progress and gaps in learning.

“Students aren’t expected to just be proficient at the content on the math and reading portions of the SAT, but also the skills of mathematics and reading,” Onuscheck said, citing a difference between the two tests.

While some students might find all these tests to be overwhelming, Onuscheck had other ideas.

“We’re very fortunate [at Stevenson] to get good test scores,” Onuscheck said. “But it’s the teaching that goes on here, the commitment to learning, that far surpasses the discussions of standardized testing.”