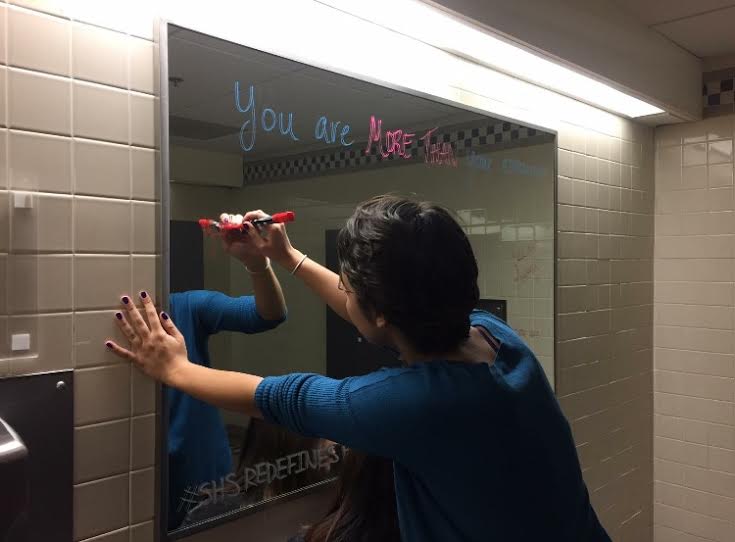 The peer helpers of Stevenson have begun a campaign to redefine beauty with a goal to help students realize that beauty is not skin deep. To promote their campaign they have written inspirational messages on the bathroom mirrors, made a video for the morning announcements and put up posters around school.

“We’re hoping that students look deeper within themselves to see that they are beautiful,” Becca Weiner ’17 said. “We hope they see that they’re great, and they should be confident in themselves.”

Though the peer helpers have not received much feedback from other students so far, Weiner says that everything she has heard has been positive. She remains hopeful that the campaign will make an impact.

The main goal for the redefining beauty campaign is to start conversations and get people to become aware of the impossible standards of beauty in the media, Jennifer Polisky, sponsor of peer helpers, said. Their campaign is something that the peer helpers believe to be affecting students.

“When we do school-wide campaigns, they are brought on by what the peer helpers are talking about and hearing about,” Polisky said. “The feel from the group this year is that body image was something that they really wanted to talk about.”

The decision for the campaign idea was choosen by students because they believed that poor body image is a problem that many students face. Weiner believes that the reason they are so easily able to talk about the effect of body image in school is due to the fact that it is something being talked about in the outside world.

“Now, in our time, there’s a lot more talk of liberal things in society and support for previously controversial topics,” Weiner said. “People are becoming more open, so it’s being brought to our attention how much it affects all of us.”

Polisky says that the peer helper’s campaign is competing with what the media depicts as a perfect body. How media and advertisements depict beauty is only one of many things that factor into a teen’s body image.

“Many, many things go into body image,” Polisky said. “It’s individual how [people] are influenced by beauty.”

The peer helpers will continue their campaign and talking about redefining beauty for an ongoing time during the year. Polisky and Weiner are enthusiastic that the peer helpers will start open conversations and increase awareness for students about body image.

“Even if it impacts one person, it’s enough to make a difference,” Weiner said.